Sustainable urban mobility plays an increasingly important role in the development of modern cities, and is intimately linked to the personal freedom of individual citizens. This website explores the idea of freedom, and how this might be increased in our settlements through the mainstreaming of cycling as a mode of urban transport. This is accomplished through the examination of a series of exemplar case studies, informed by experiential research in the form of a study tour, and the analysis of secondary sources. This research leads to the realisation of key principles that inform successful urban cycling infrastructure, which are then expounded on to provide a strategy for improving the situation in the UK, in light of political and social obstacles.

With the general growth of interest in issues of sustainability, it is hardly surprising that the relationship between our cityscapes, and the promotion of cycling as a form of sustainable urban mobility, has attracted considerable attention. A gradual increase in environmental awareness has accelerated over the last decade to a point where a lack of appreciation of these issues is becoming as distasteful as racism or sexism. This has been compounded by an increase in the frequency of environmental crises like flooding, and means that there is now growing recognition of climate change as something that is impossible to ignore. The result is a higher level of commitment to sustainability, as epitomized most recently by the US and China, the biggest emitters of greenhouse gases, agreeing to ratify the Paris climate change deal.

The causal link between high levels of urban cycling and greater quality of life is also starting to be recognised. Recent studies have begun to illustrate just how crucial personal freedom is to the determination of overall quality of life. Better health, greater community, and higher levels of wellbeing, are all beginning to be recognised as potential attributes of our built environment. One such report by UNICEF, rates Dutch Children as having the greatest well-being of all children globally. This is a function of their environment, which enables them to enjoy greater freedom than British children, whose wellbeing is rated very low by the same study (UNICEF, 2007). Low road casualty rates in the UK have come at the cost of our freedom and our health, and have resulted in an over-dependence on the private car, which makes even quiet residential streets often dangerous places to be. This has not only rid our streets of friendly community, but means that children experience significantly lower levels of personal freedom and as such move less. In consequence, one in three children in the UK is overweight or obese. A report by Nike and Sustrans concluded that today’s children will be the first generation in history to live shorter lives than their parents (Designed to Move, 2012). In contrast, countries like the Netherlands have an even lower road accident rate than the UK, and also the happiest, healthiest children in the developed world. 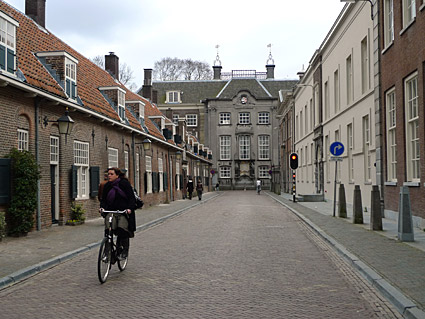 A Street in Utrecht | Image from Urban 75

Sustrans, a charity founded in the seventies in response to the oil crisis and over-dependence on the motorcar, has been fighting the cause for UK cycling since 1974, their main achievement being the establishment of a nationwide network of cycle paths. However, these are not generally focused on urban cycling, and more way-finding through country lanes. Only recently has the charity started to focus on city cycling through collaboration with seven key UK cities including Birmingham, but their approach is more focused on exploring attitudes towards cycling rather than improving infrastructure. Sustrans work in partnership with the government, and have produced several key documents and widespread design guides, these are significant as despite guidance coming from the government, much of the ultimate responsibility for cycle provision lies at local level, and as such is reliant on these sorts of documents.  Nationwide, governmental strategies have tended to focus on encouraging local authorities to provide for cycling through the allocation of funding and targets, but despite aspirational ambitions, approaches have been characterized by a lack of cohesion between the government and local authority, and lack of funding. As such, the cycling modal share in the UK remains low at 2% of all journeys (Cycling Embassy, 2014). For comparison, here is a selection of the modal share of other cities and locations around the world.

The studies that I have considered in the course of this project have come from numerous different backgrounds to converge on the topic of urban cycling. Some focus on sociological issues, some on political obstacles, and others on the physical nature of good cycling infrastructure. As this is a controversial topic that often polarizes opinion, a variety of perspectives can be unearthed that hold within them a wealth of information for consideration. As such, this study relies heavily on existing sources; but is informed primarily by experiential research that was carried out on location. This was not empirical in nature, but merely created a contextual awareness to inform the analysis of subsequent secondary research.

Proponents of urban cycling can be found in a wide variety of places, and notable studies include the work of David Hembrow, a British cycling campaigner working in the Netherlands who runs study tours of Dutch cycling infrastructure. He blogs extensively on the obstacles preventing the adoption of mainstream cycling in the UK, and the advantages of the Dutch system. The ‘Copenhagenize’ design company, led by Mikael Colville-Andersen, are also a comprehensive source of studies on urban cycling, but much of this represents marketing material and thus needs to be considered with care.  The work of these two figures is often informed by research and data collected by the BBC, the National Census, and the Dutch Fietsberaad (Dutch Cycling Embassy).

Government research studies have also been dedicated to studying patterns of urban cycling. From the Netherlands, we have the CROW ‘Design manual for bicycle traffic’, and from the UK – the equivalent document ‘Making Space for Cycling: A guide for new developments and street renewals’. Along with this, a key document for my study is produced by Transport for London. This is called the ‘International Cycling Infrastructure Best Practice Study’, within which are examined 13 cities in relation to cycle infrastructure, safety, and culture. The study was tasked to focus on design approaches in cities with high levels of cycling and/or recent significant growth in cycling numbers, so is pertinent for a study of my purpose.

It has also been interesting to note that the obstacles to overcome for the adoption of mainstream urban cycling overlap with the challenges facing autonomous vehicles, both representing holistic sustainable urban mobility systems in which faster travel times are offered to those who travel more sustainably. For multi-modal journeys, the reliability and accessibility of autonomous vehicles, could offer greater opportunity for multi-modal integration, with vehicles potentially departing from a community hub that accommodates a range of different modes of transport, including cycle facilities. Farrells speculate that autonomous vehicles will also make available 15 – 20% of land space in our current towns and cities. (WSP group, 2016) This might be achieved largely through the elimination of on-street parking, and opens up great possibilities for more widespread cycle infrastructure. Keep reading…